The Druid is returning to Diablo IV but was first introduced in the Diablo 2 Lord of Destruction expansion back in June 2001.

The Druids inhabit the northern forests of Scosglen and developed their magic independently from the eastern mage clans. They served as the warrior-kings of their tribes, usually living apart from their people in massive stone towers that were covered with vines and ivy. As masters of the natural world, they were able to control living creatures and the very forces of nature.

While we only know basic information about the Diablo IV version of the Druid, it’s expected the class will stay close to the Diablo 2 Druid. The Diablo 2 Druid controlled both Elemental and Prime magic giving the class control over fire, earth, and wind. This attachment to nature allowed the class to summon ravens, wolves, vines, and natural spirits. Shapeshifting and elemental attacks are expected to play a big role in the class when it arrived in Diablo IV.

Diablo IV is a work in progress and whilst the classes so far revealed will appear in the game the specific’s of theirs skills and indeed which skills they have can all change before release.

The Druid has access to six groups of skills and in general they serve the following purposes:

Shifting between Werebear, Werewolf and human form is automatic depending on which skills the Druid is using, it is instant and seamless.

Spirit doesn’t drain when not in use, it only drains when the Druid uses skills that use it.

The Druid does not need to summon Companions as they are passively generated and will attack the Druid’s enemy automatically.  However, each Companion comes with an Active Skill that the Druid can direct the Companion to inflict on a specific target or area.

The Druid’s companions are translucent to other players.

Certain Talents can affect an entire category of skills, for example points in the Natural Resonance talent increases the damage of all Earth and Storm skills.

* Fortified characters take 30% decreased damage until all of their fortified life is removed.

* While Unstoppable, control impairing effects are removed and prevented.

Companions cost nothing to summon and do not need to be controlled once active.  However, each companion comes with an Active skill that allows you to target their special attack on a single target or area depending on the skill.  These Active skills have a cooldown.

* Vulnerable enemies take 30% increased damage until off of their vulnerable life is removed.

* While Unstoppable, control impairing effects are removed and prevented. 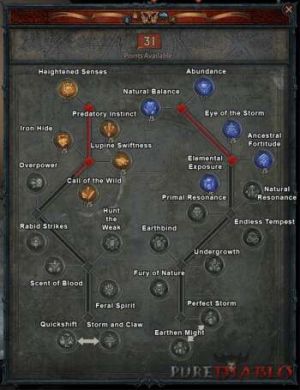 The Druid has access to two talent trees, Shapeshifting and Nature and points can be placed in these to further passively augment the Druid’s skills.

This system allows you to decapitate, bisect, freeze, shatter, eviscerate, and burn your enemies depending on skills used. The Druids's are as follows:

The Druids are a race of nomadic warrior-poet-kings. Driven from their homelands long ago by their Barbarian brothers, the Druid tribes live primarily in the northern forests. Using mystic secrets passed down through the generations, they summon the elements of fire and wind to do their bidding, and command the creatures of the forest to aid them in battle. Shifting from their human forms into that of wild beasts, gives them abilities far beyond those of other mortals. 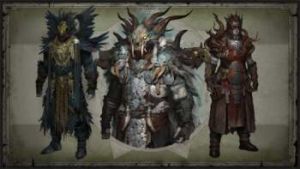 Fiacla-Géar, on the other hand, believed that only through obtaining a spiritual oneness with the land they had sworn to protect could the people truly appreciate the importance of their role. Both agreed the other’s philosophy had merit, and so around the time Bul-Kathos united the tribes, Fiacla-Géar gathered together a small group consisting of the tribes’ greatest warrior-poets and shamans and mysteriously retreated into the forests surrounding the area known as Scosglen (new zone coming to Diablo IV). There he and his people created the first of the Druid Colleges, huge mortar-less stone towers, covered in vines and safely hidden beneath the leafy canopies of the dense forests. They have dwelt there ever since, forging a new way of life for themselves. They created a new culture and language, cutting themselves off from their Barbarian cousins and their ways, vowing not to return to the Steppes of Mt. Arreat until the time of the Uileloscadh Mór, (“Great Holocaust”) between the men of the world and the demons of the Burning Hells.

Here, in preparation for the impending conflict, he taught his people the Caoi Dúlra (“Way of Nature”), a harmony with the natural elements of the world, its plants and animals, as the heart of its most intrinsic beliefs, for they are the personification of the very world that the Druids have sworn to protect. Not only was Caoi Dúlra the basis for their system of values, but through its study and practice, the Druids learned to bond with the natural entities of Sanctuary. This bonding was so absolute that eventually, they discovered how to talk to the plants and animals, and these beings taught them all the secrets of the natural world. They taught them methods to call animals from far away, how to summon sentient plants from the earth, ways to change their own forms to share the strengths of their animal cousins, even, to a limited extent, techniques to control the weather.