All Blizzard games go through the beta test process with the public and Diablo 4 is no exception.

More details of the pre-order beta access will be available at the start of 2023.

Players who pre-orders can gain access to the next public beta test as confirmed following the Game Awards.

In a post on Windows Central they cite a source confirming an open beta and Early Access beta will be coming early 2023. [1]

Testers were sent an alert to say the end-game closed beta will conclude on 18 November 2022.

As revealed in the Beta test announcement, a close beta test will take place first under NDA to test end-game content. This will specifically include end-game features such as Helltide, Nightmare Dungeons, Whispers of the Dead (Tree of Whispers), Fields of Hatred (PvP), and Paragon Boards.

The test will be highly selective:

Specifically, we’ll be using gameplay data to invite a limited number of Diablo players who have recently spent significant amounts of time playing the end-game experiences of Diablo II: Resurrected and Diablo III.

If you have not received an email invite to the Diablo IV Closed Beta by November 18, then you have not been selected to participate.

Public beta testing will not take place until the start of 2023.

A leaked internal document indicated that there would be some kind of Diablo 4 announcement at the Game Awards on 8 December.

How Long will the Beta Test run?

Based on previous tests for games such as World of Warcraft, the Diablo beta test could be lengthy, possibly as long as six months.

Due to the fact the game is set in an open world and is a lot more complex than previous Diablo titles, Blizzard is going to need a longer than usual testing period for a Diablo product.

Blizzard launched their Diablo 4 beta test pre-registration opt-in for players on 11 june 2022. Potential testers could join the lottery to be picked via the opt-in link.

Blizzard has confirmed that beta testing will include end-game content.[2] 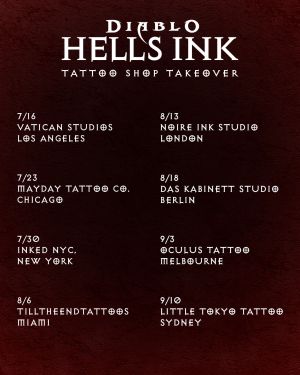 One of the rewards for receiving a tattoo was access to the Diablo 4 beta test.

On 21 July 2022, the BattleNet launcher received an update which indicated that they were now preparing for a Diablo 4 Beta test. The addition of Fenris assets to the launcher in the file changes was a key sign Blizzard was moving toward a test.

Hey all, I’m loving all the energy and excitement about a Diablo IV Beta showing up on http://Battle.net but you should know that this is an internal only test. Sorry! We will have more public testing in the future as we continue down the path to shipping in 2023!

When will the Diablo 4 Beta Test Begin?

Following the Hell's Ink promotional campaign and the BattleNet launcher update, there is speculation that the the Diablo 4 beta test could begin as early as September 2022, and most likely before the holiday season.

Testing did begin just prior to September but for friends and family only.