The Barbarian returns from Diablo 2 and Diablo 3. The class proved highly popular in the early days of Diablo 3’s release so it’s no surprise the class is back. The Barbarian was one of the first two classes revealed when Diablo 3 was announced and was the only class to use strength as a main stat.

The barbarian is the only returning class. Originally we actually planned to have no returning classes, but as we developed the barbarian, it essentially ended up turning into a barbarian. We sort of got to the point where we went – because we actually had a different name for him originally – I think we’re going to call it this other name and everyone else is just going to call it the barbarian, so maybe we should just call it the barbarian. One of the things we really did not want to do – it’s why we set that initial goal to not repeat classes – was, we didn’t just want a rehash; we wanted to make the sequel and the sequel has new gameplay and new experiences. I know a lot of people really love the classes in Diablo 2 and it’s not my desire to intentionally arc those people – I like those classes to; I love the Necromancer, he’s my favorite class from Diablo 2 – but as our goal, we really wanted to provide new experiences; that was our focus.

As the name suggests this is the Barbarian’s collection of weapons but it specifically refers to weapons he has on his person and not simply in his backpack.  In Diablo 4 the Barbarian will be able to equip four weapons at one time switching between them automatically depending on which skill he is using. He can have a two-handed bludgeoning weapon, a two-handed slashing weapon, and two single-handed weapons to dual wield.

The Barbarian has access to six groups of skills and in general, they serve the following purposes:

The Barbarian can have four weapons on his person, two single-handed weapons and two two-handed weapons, and will swap between them automatically depending on the skill being used.

Certain skills generate Fury which is used to execute other skills. Fury will drain from the orb over a short time if not used.

Certain Talents can affect an entire category of skills, for example points in the Guttural Yell talent means all your Shouts cause your enemies to inflict less damage on you for a few seconds.

Note: Diablo IV is a work in progress and whilst the classes so far revealed will definitely appear in the game the specific’s of theirs skills and indeed which skills they have can all change before release.

This system allows you to decapitate, bisect, freeze, shatter, eviscerate, and burn your enemies depending on skills used. The Barbarian's are as follows:

Lead by Bul-Kathos, the tribes called “barbarians” by the people of the Western Kingdoms united and took upon themselves a sacred duty to protect Mount Arreat and its mystical secrets, until it was destroyed. They call themselves the Children of Bul-Kathos.

The Children of Bul-Kathos developed a kinship with the land over the years, and learned to harness the primal energies in nature to enhance their own substantial physical prowess, popularly referred to as “fury”. They also developed a spiritual strength that far surpasses most of the living and dead creatures found throughout Sanctuary. Ancient spirits even guarded the very gates to the Worldstone Keep.

A number of Barbarians started roving the lands outside the Steppes, prepared for war and seeking information regarding the activities of the Prime Evils. During the concluding events of Diablo II: Lord of Destruction, the characters defeated Baal, only to learn from Tyrael that the Worldstone had been corrupted and would have to be destroyed. The destruction of the Worldstone caused a shockwave so powerful it blasted Mount Arreat to rubble, destroying the remainder of Baal’s army in the process, thus saving the Barbarian lands from its invasion. However the Barbarians found their sacred Mt. Arreat laid to complete waste, and the duty that had been theirs for generations was therefore broken.

Twenty years later, when Diablo III takes place, the Barbarian lands are largely deserted, and the only remains of Mount Arreat, formerly the symbol of the lands and the source of the Barbarians’ spiritual strength, is a huge crater.

More than the physical damage, the events detailed in Act Five of Diablo II devastated the Barbarian culture. The Barbarians gained their identity and cultural pride from protecting the Worldstone within Mount Arreat. To see it defiled by Baal and his minions, and then destroyed, tore out the heart of these proud people. They abandoned their homeland and became nomadic, wandering the lands of Sanctuary and pitching themselves into battle after battle in an effort to forget the pain of their shattered homeland.

Abd al-Hazir visited the Barbarian lands and wrote about his experiences and observation in the 25th entry of his writings. It sets the stage for the story we will learn when playing the game.

The Barbarians consider it their sworn duty to protect Mount Arreat and the mysterious object within. They believe that if they fail to uphold their duty to the great mount, or are not given a proper burial upon its slopes, they will be denied a true warrior’s death, and their spirits shall roam the land without honor for all eternity.

If there are any barbarians left alive, they must truly be without hope. Perhaps this is the genesis of the rumors of monstrous things reported to resemble the barbarians in size and ferocity, but that are in reality nothing more than unreasoning, inhuman beasts. Could the destruction of not only their home but also their very beliefs have actually brought this magnificent race so low?

As related in entry #25 in the writings of Abd al-Hazir.

In my journey to catalogue the various denizens, civilizations, and fauna of our world, I have traveled far and wide, but never before have I been struck with such dismay as when standing upon the ramparts of the ancient fortress of Bastion’s Keep. I came to see firsthand the barbarians, those near-legendary, immense, relentless, dual-wielding furies of combat dwelling upon their sacred Mount Arreat.Instead, I stand here looking at a mountain that has been torn asunder by some extraordinary force. The sight, I must confess, is incomprehensible. Yet what I see before me cannot be denied.

What truly happened here? Where are those majestic warriors of old?

Though they were once misunderstood as simple, bloodthirsty invaders, the long and noble history of these proud people is now rightly acknowledged. And therein lies the greater tragedy here, for those of us familiar with the nobility of the barbarians remember too what they call their “vigil”, the concept that lay at the very heart of their culture. The barbarians consider it their sworn duty to protect Mount Arreat and the mysterious object within. They believe that if they fail to uphold their duty to the great mount, or are not given a proper burial upon its slopes, they will be denied a true warrior’s death, and their spirits shall roam the land without honor for all eternity.

If there are any barbarians left alive, they must truly be without hope. Perhaps this is the genesis of the rumors of monstrous things reported to resemble the barbarians in size and ferocity, but that are in reality nothing more than unreasoning, inhuman beasts. Could the destruction of not only their home but also their very beliefs have actually brought this magnificent race so low?

Below is an early version of the Barbarian talent tree. 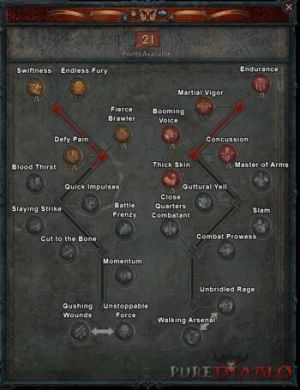 Barbarian Talent Tree - This will likely have now changed.
Retrieved from "https://diablo4.purediablo.com/index.php?title=Barbarian&oldid=2793"